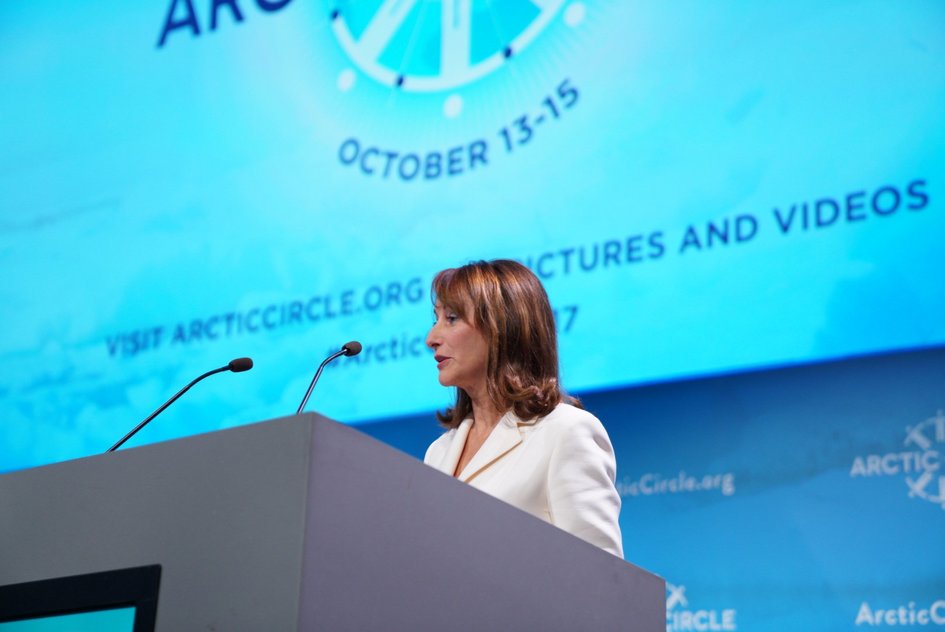 It is a great honor to be invited at the opening session for the Arctic Circle this year.

I thank Iceland for the warm welcome I received for the third time and I thank President Olafur Ragnar Grimsson for his kind invitation.

I remember when we went together with President Grimsson to the Solheimajökull glacier, how impressed we were, President François Hollande, Nicolas Hulot and myself, by the ice melting. And those pictures all around the world had a great impact on fighting climate skepticism before the Paris agreement.

I would like to greet again Iceland for your strong commitment in the Paris Agreement and for launching together with France during COP21 the Geothermal Global Alliance, gathering today 100 countries.

1. The Arctic is of global interest:

The Arctic Circle is an unmissable event for Arctic issues. And its success will increase more and more as today, the scientific observation of the poles teaches us the most spectacular lesson on the global warming reality and its dramatic consequences.

As you know, the Arctic is the canary in the coal mine for the climate change occurring all over the world.

The consequences of climate changes in the Arctic are already being felt all over the planet, even in the Sahel.

Today the Arctic Council has thirteen Observer States, working along with the 8 Arctic States.

And since 2000, France takes its Observer role very seriously and I would say with passion.

2/ As an Observer State, France is committed to a high level of cooperation in sciences.

Building on its long-standing tradition of exploration and expeditions in high latitudes, France is a polar nation.

The names Dumont d’Urville, Charcot and Paul-Emile Victor are part of France’s cultural heritage and collective imagination along with French writers such as Jules Verne, who described one of the most beautiful volcanos in Iceland in his book “Voyage au centre de la terre”.

Today, this polar heritage has built a strong community of more than 400 scientists.

They work in various programs in CNRS, Museum of Natural History, various universities and the Polar Institute and are involved in international programs like here in Iceland where two days ago I met young talented scientists working here together.

Another example, with Germany, we operate the AWIPEV scientific station in Svalbard, a very interesting place for science, as I saw myself last year.

Thanks to our cooperation with the Arctic States, French research deepens its expertise on earth sciences such as glaciology, climatology, biology but also in social sciences because after all, the human is at the center of all our reflections.

We still have so much to learn, together, from the poles especially their biodiversity.

This is why in 2016, France published its National French Roadmap to the great challenge of the Arctic, presented by Mr Michel Rocard the former Prime Minister.

I am now working on this roadmap, establishing priorities and ways of actions.

Meetings such as this Arctic Circle session, with such a high level reflection and diversified topics, are a great support for scientists and for policy-makers.

I will make sure for example that the Arctic is on the agenda of all the next climate international events.

Indeed, we all know that we still need to work very hard on implementing the Paris Agreement.

This is why, two years exactly after its signature, on December 12, President Emmanuel Macron will welcome an international Summit in order to make the planet green again, as he said.

This Summit will be co-organized with the United Nations and the World Bank.

The next COPs will also be crucial for the implementation of the Agreement and for the protection of our planet.

On this topic and as you may know, the French President recently launched a “Make Our Planet Great Again” initiative, seeking to attract talented researchers from all around the word, because I think that, as President CO21, we have a special responsibility to keep on the spirit of the Paris Agreement.

I have a special thought for the African continent, who may seems far from here, but it is not. Because what is going on here has an impact over there.

Just like the courageous Icelandic fishermen, so accurately described by the famous French writer Pierre Loti, these hard worker men, and their families, hit with fear and fatigue, overcoming the wild and raging sea around them, we have to show the same courage today in the climatic fight, major step towards global justice and human dignity.